“As Gregor Samsa awoke one morning from uneasy dreams, he found himself metamorphosed in his bed into an insect-like vermin of grotesque proportions.”

Thanks to a message from director Chris Swanton, the Backbrain has discovered that Swanton’s excellent feature film version of Franz Kafka’s Absurdist novella The Metamorphosis [Die Verwandlung] has undergone changes that Swanton hopes have resulted in “a much better version” of the film. He has dubbed it the Centenary Edition, as the story first appeared in book form in 1916, making 2016 the perfect time to revisit the film. 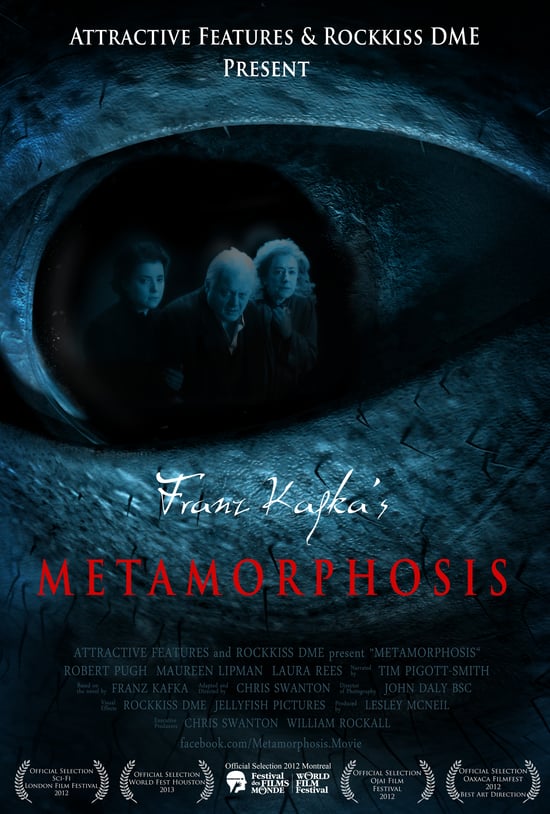 Kafka’s story of a young man transformed overnight into a repulsive insect, written in three weeks in 1912 when he was just twenty-nine years old, has been the source of inspiration for writers, dramatists, film-makers, musicians and artists since his early death from tuberculosis in 1924. Many see it as a fanciful and satiric autobiography, though personally I don’t know enough about Kafka’s life to comment. Either way, it is a remarkable work, strongly visual and deeply emotional.

For detailed information on the development of the film, see the exclusive article that appeared on Undead Backbrain in January 2011: Metamorphosis: Unleashing the Bug.

So what does the Centenary Edition offer?

“The Centenary Edition of Franz Kafka’s Metamorphosis celebrates the first publication of the novella in book form in 1916,” said Swanton. “We have developed a complete package that offers much more than just the film.”

In fact his Metamorphosis comes as a double DVD together with the making-of documentary Behind the Scenes, which looks at the challenges encountered in transposing Kafka’s iconic story to the screen.

But that’s not the end of it.

Also available is the Centenary Edition paperback with a fresh translation and detailed commentary.

Swanton explained, “Together, the faithful film adaptation, documentary and book provide a springboard to the discovery and interpretation of the work, as well as igniting debate on what Kafka’s intentions with his enigmatic story might have been. The straightforward approach of the commentary makes Kafka’s story accessible to any level of study.”

The film is also available digitally on Vimeo, in the form of a 24-hour streaming period, or a stream and download any time option. For obtaining the double DVD and book, go to the STORE link on the website.

The Backbrain asked Swanton about the new cut of his film. What was done to make it “a much better version”? He explained:

He added: “The overall result of these amendments has been to change the tone of the film so that it is now a much darker and more atmospheric piece.”

This entry was posted in Film, Giant Bugs, Independent film. Bookmark the permalink.