The Giants of Leroy

Last week the Backbrain featured the latest film from Jeff Leroy — Rat Scratch Fever, a low-budget epic about giant rats from outer space that actually looks like it will be a lot of fun.

Now Kaiju Search-Robot Avery has discovered what Leroy has been up to in the recent past, monster-wise — and they look like even more fun than the rats.

They’re giant spiders, with SFX that may be low budget but are more interesting than I’ve seen from some bigger budgeted flicks, featuring all the scale-model thrills of daikaiju eiga. If Rat Scratch Fever was an ode to Bert I. Gordon’s brand of giant monster SFX, this one looks like an ode to Godzilla and his pals.

Some nice destruction there, eh? Well, check out this next one — a sequel to Creepies. For some reason the following preview is the Japanese version, which seems rather appropriate given how much it looks like a product of that film industry and uses its characteristic SFX techniques. It features giant spiders, maser cannons and a giant spider-fighting giant robot! 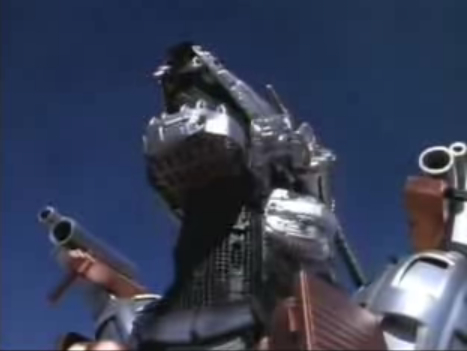 Finally, here’s a sequence from the above film in which Las Vegas and a lot of bystanders get totally trashed by the military, who try to deal with the giant spider while displaying all the delicacy of Godzilla on a bender.

I have to get copies of these flicks!

This entry was posted in Daikaiju, Film, Giant Monsters, Trailers. Bookmark the permalink.

1 Response to The Giants of Leroy