It’s quite a coup when you get the original actors, all dead, to cameo in your movie about the silent era of Hollywood — without splicing in old footage or engaging in CGI re-constructions.

Director Alex Monty Canawati’s silent, black-and-white biopic, Return to Babylon, is said to have been infiltrated by phantom figures — ghosts, they reckon, of the dead stars that are the subject of the film, which is about assorted scandals in Hollywood at the beginning of the 20th Century.

Much of Return to Babylon — “part mystery, part comedy and part psychological drama” — was filmed on location in the estates of the deceased stars, and lead Jennifer Tilly and other members of the crew began to feel that they were not alone on the sets.

It was only in post-production that Canawati noticed that the film was haunted by odd visual glitches; “several of the stars were ‘replaced’ by images of haunting ghostly apparitions”. Or at least ghostly faces were superimposed over their faces: 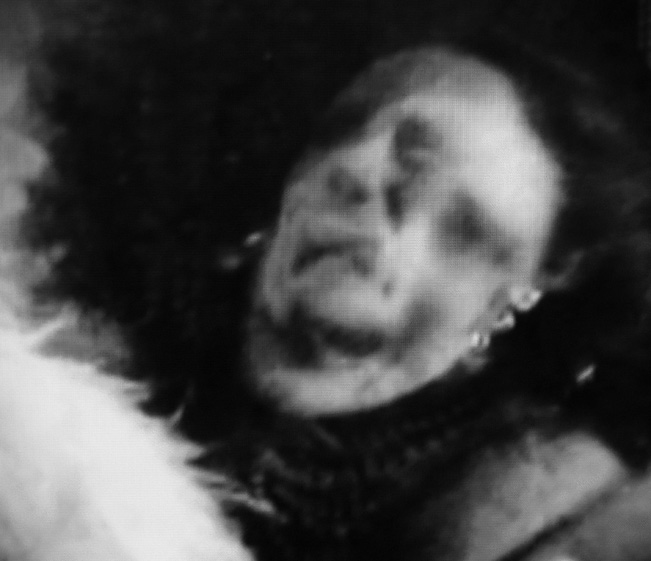 The film’s release has been long delayed, and according to IMDB, the reason for the delay was the discovery of the “odd figures, morphing of characters and ghost-like images, etc. in some scenes. These were especially clear in still framing. These were found to be in the original negatives and not in the special effects. The film makers decided the images do not take away from the integrity of the film, thus the release date.” The film is being release this Halloween at the Salem Cinema in Salem, Massachusetts.

As Ken Hulsey, reporting on Monster Island News, puts it: “It seems that many deceased silent movie stars jumped at the chance to once again grace the silver screen!”

Spooky, eh? Whether it’s an unexplained phenomenon or a bit of canny (or uncanny) PR, I like the idea!

This entry was posted in Uncategorized. Bookmark the permalink.

5 Responses to Real Ghosts in Babylon?