Ode to Mr BIG’s Food of the Gods?

It’s about time LA got a bite of some giant monster action. Godzilla? Na. King Kong? Of course not. Giant robots? Not this time. Dinosaurs? Nothing so classy.

It’s just a horde of giant rats from outer space! 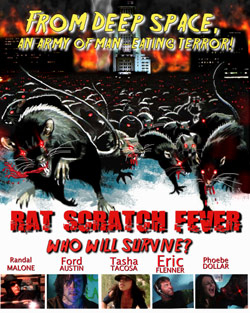 Rat Scratch Fever (written, directed etc. by Jeff Leroy) is currently nearing completion and due to be released in 2009. Leroy says that his film is a homage to Bert I. Gordon’s 1976 Food of the Gods — a film that bore little resemblance to the original H.G. Wells novel (though both had giant rats in them so by Hollywood logic that makes them identical). Leroy commented:

“I picked up Famous Monsters magazine every month, and they had a cover story about Bert I. Gordon’s film with all kinds of really cool stills of giant rats attacking people, with oversized rat heads by makeup mastero Thomas Burman. FOOD OF THE GODS didn’t live up to that hype, but it still had a lot of energy and animal attacks. My film has the same energy and better effects. No rats were hurt, but plenty of humans get gnawed to pieces.” (Fangoria)

A life-seeking mission to a distant planet achieves its goal in a less-than-satisfactory way when astronaut Sonja (Tasha Tacosa) and her team are attacked by giant rats. Somehow the lovely Sonja and her boyfriend make it back to Earth, but so do the rats (I’m guessing by smuggling away in a convenient human body — have a look at the trailer below to see what I mean) and a horde of the critters end up rampaging through Los Angeles. There’s lots of rodental mayhem, bloody deaths, collapsing buildings and all that good stuff. Sonja’s boss is a chap by the name of Dr Steele and he’s probably the Bad Guy — I’m guessing this robotic and rather narcissistic Dr Phibes character below is him:

Looks nasty. Anyway, the scenario sounds extreme enough to be fun and that impression is confirmed by the trailer:

The poster and some more pictures from the film can be seen on the Fangoria website.

This entry was posted in Film, Giant Monsters, Trailers. Bookmark the permalink.

3 Responses to Ode to Mr BIG’s Food of the Gods?