The Tale of How

The Tale of How (2006) by the Blackheart Gang is an incredibly beautiful piece of animation — a surreal adventure filled with profound whimsy and ornate decoration, not to mention the biggest octopus you’ve ever seen. 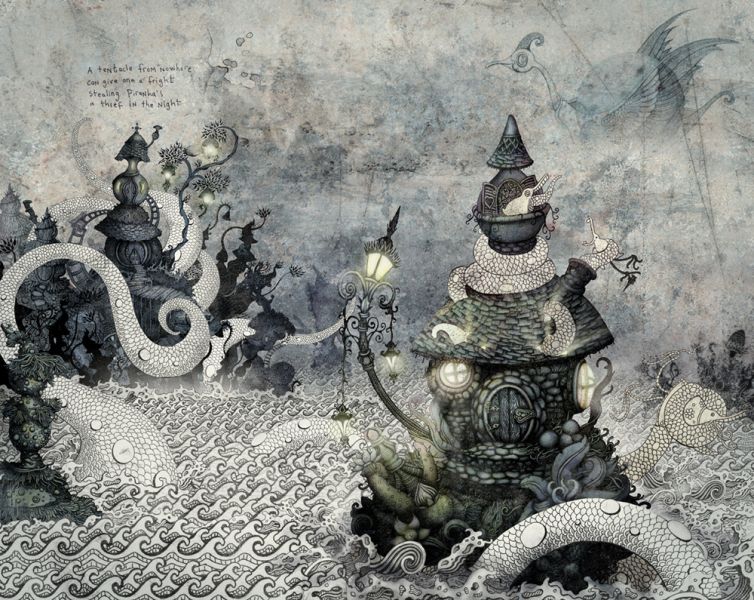 According to the Gang, The Tale of How is the second part of a trilogy of works called the Dodo Trilogy. It will be flanked by The Tale of Then and The Tale of When.

The Dodo Trilogy (which it is called) in turn fits into a much greater work called The Household.

In the The Tale of How we meet a giant octopus with a tree growing in his head, the terror of the Indian ocean , OTTO THE MONSTER! His lonely pastime is to devour the innocent dodos who live on his head. But the dodos unite and with the help of a little white mouse, they escape the clutches of the terrible be-tentacled tyrant and sail off into the sunset on their mother the tree.

The Tale of How consists out of a series of thirteen prints and a short animated film:

The website includes a wealth of the Blackheart Gang’s other work, include more pages from The Tale of How like those below: 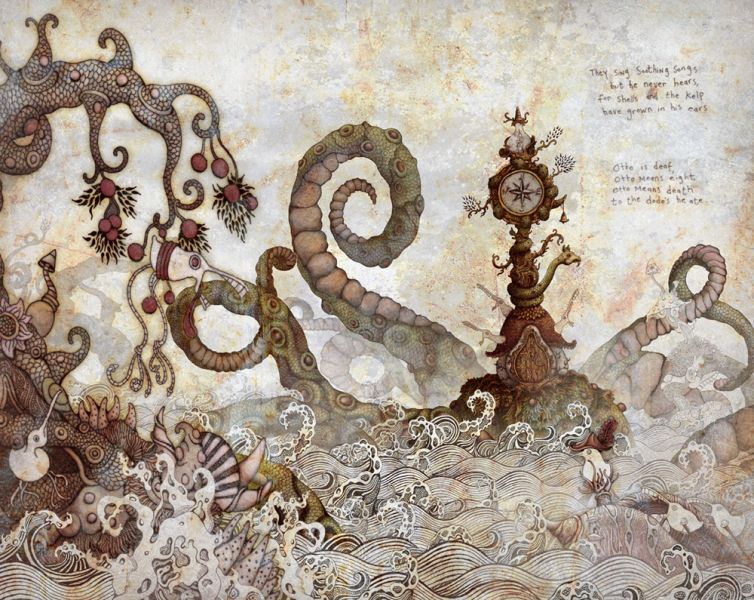 Coming up next will be Part One, The Tale of Then, which, according to the Gang, helps make sense of The Tale of Now.

The Tale of Then is a tragic love story with a difference, as it tells the tale of a hill who fell in love with a girl.

In The Tale of Then we explore the character of Otto, we’ll learn of his dark past and how he got to be such a grouch. But most importantly we’ll learn about the tree that grows on his head. It is a story of love and loss and the tragedy which lies between the two. A story of a girl and the silent hill who loved her. His name is Otto … and for years he watched this young lady as she herded goats on his head. As the seasons came and went his interest became fascination which soon grew into love. He longed for her so that even a peach pip, carelessly disregarded by the girl, became the subject of his eternal embrace. The tree that grew would watch her, blades of grass would caress her, his rivers cease to flow when she grew near. But alas! In the autumn of her life she grew old and she no longer walked on the hill. When she finally past away, she was buried inside of him and the tree turned red and lost its leaves. Fueled by her cold blood, Otto’s love turned to madness, and howling his loss to the moon, Otto tore his ancient body from the cruel earth. The earth shook as he raised high on his tentacles, engulfed in rage, Otto lay her city to waste and fled into the ocean … and this is where The Tale of How begins. (Source)

And now for good measure (because it is so beautiful), here is an ad by the Blackheart Gang’s Jannes Hendrikz and Ree Treweek (known as Shy the Sun):

Sea Orchestra from Shy the Sun on Vimeo.

This entry was posted in Animation, Film, Giant Monsters. Bookmark the permalink.

1 Response to The Tale of How