I meant to plug this earlier but ran out of time. So this is a flash info-dump. MORAV — the giant robot combat franchise being developed by Fon Davis — is in its last day on Kickstarter, seeking funding to complete the pilot of the TV series MORAV: Missions. 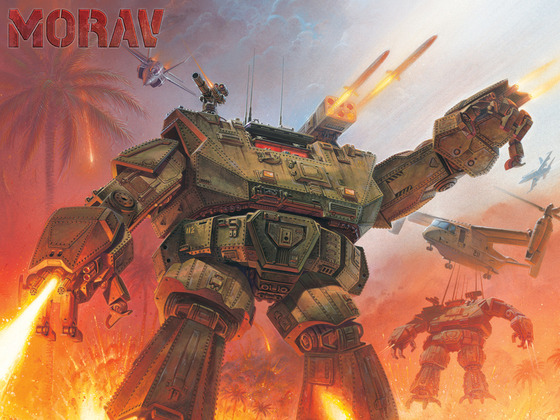 The series is described thus by Davis: “MORAV: Missions plunges you in to the middle of World War III with a giant robot crew and an embedded news correspondent as they fight for survival in a terrifying robotic war.  MORAV examines the human condition under the most extreme life and death situations.”

If that sounds like your cup-of-tea (or coffee or motor oil or whatever beverage you prefer), go to the Kickstarter site and pledge them some money. There’s plenty of information there to show you what you’re backing. Frankly, it looks superb.

Davis has already achieved an enormous amount, in terms of background development and franchise building, having completed an excellent graphic novel set in a world caught up in a massive near-future war, with action, drama and giant robots as well as developing many of the robotic stars. Take a look at this appeal video to get an idea of the quality he is aiming for.

When was the last time we had a full-on, live-action, giant robot war epic on television? Um…. never? Despite such shows as the excellent and sadly underrated series The Sarah Conner Chronicles, I don’t think anything quite like MORAV has ever been on offer. Anime, yes. But live action — and on an epic scale?

Go read about it — and put your money where your enthusiasm is. You’ve got about 8 hours from… now!

More details about MORAV, the franchise, on Robot War Espresso. I’ve been meaning to do a piece on the excellent graphic novel, which I’ve read and thoroughly enjoyed. Must get to that. Stay tuned.