Get Ready to Pounce!

Secret government/military experimentation, whether based on genetic manipulation and chimaera creation or research into the use of alien creatures or cryptids for military purposes is a major theme in modern cinema and TV, post X-Files.

A new film, currently two weeks into its three-and-a-half week shoot in suitably traditional London, England (and later Wales), fits right into this category. The main creature has a touch of the werewolf about it, though the director, Keith R. Robinson, says it isn’t a werewolf, merely “werewolf-like”. At any rate, something has become the subject of a convert government operation and it’s not happy about it.

The film has the rather innocuous title Pounce, but the imagery is telling. 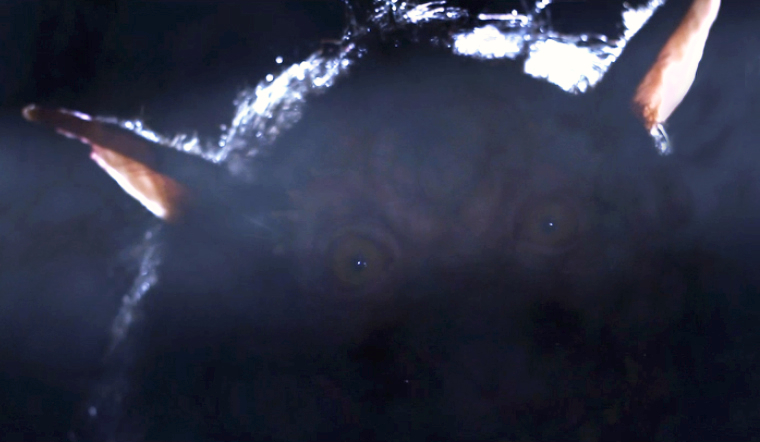 Something watched Marty and Laura’s small tent as it sat on the mountainside flapping in the wind, something that waited completely still in the shadows…

Pounce is a thriller/horror film about a group of conspiracy theorists bent on secretly watching a covert military base in the desolate Welsh mountains, looking for experimental and highly classified test aircraft to report to a Fortean-style magazine. In the midst of their vigil, they uncover evidence of a Top Secret and highly lethal creature (kept secret since its capture in the 1920s), which the military and Government are testing for its potential as a weapon: its fur has the ability to turn invisible in moonlight. The film follows the young group’s plight as they are hunted both by the creature (which the Army has nicknamed “The Silverhide”) and the military who will stop at nothing to keep their classified specimen a secret… 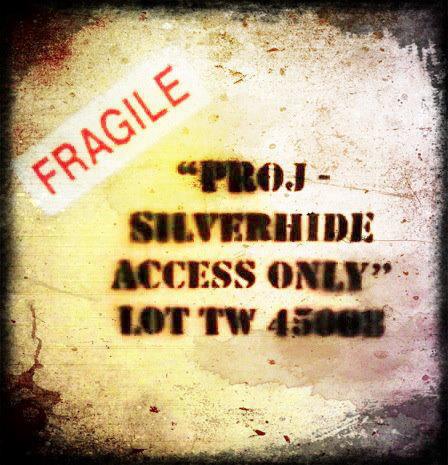 Below is the first teaser trailer, made before filming began as a demo:

The Facebook page of Pounce has an interesting way of displaying images from the film, accompanying them by descriptive text: 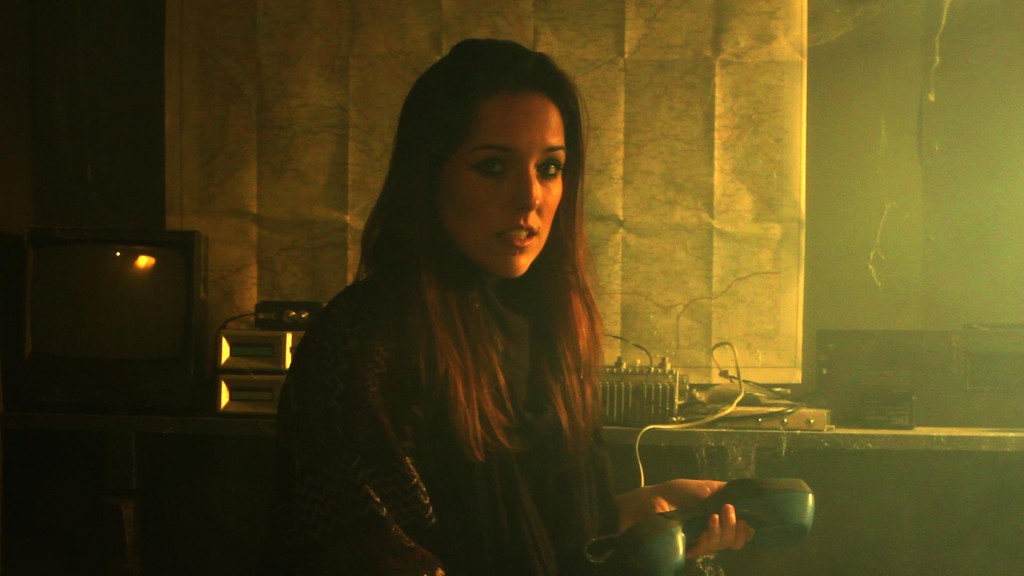 She’d been sitting alone and in the dark with a loaded gun and now a team of equally scared companions. What more could go wrong on this cold and dark evening? As she sat there pondering this thought, the radio beside her suddenly buzzed into life and a familiar voice of her friend Laura burst through the static.

“Sinead? Sinead, can you hear me?” Sinead knew that Marty had gotten back to the tent and had by now told Laura about the gun and about the people following her. It was time to come clean to her friend who sitting isolated on the side of a dark and barren mountainside was not going to be very impressed with this new and dark twist to this evening’s proceedings. Sinead sighed and picked the radio up.

A cold wind blew through the bunker, chilling Sinead’s already cold body some more as she started to speak… 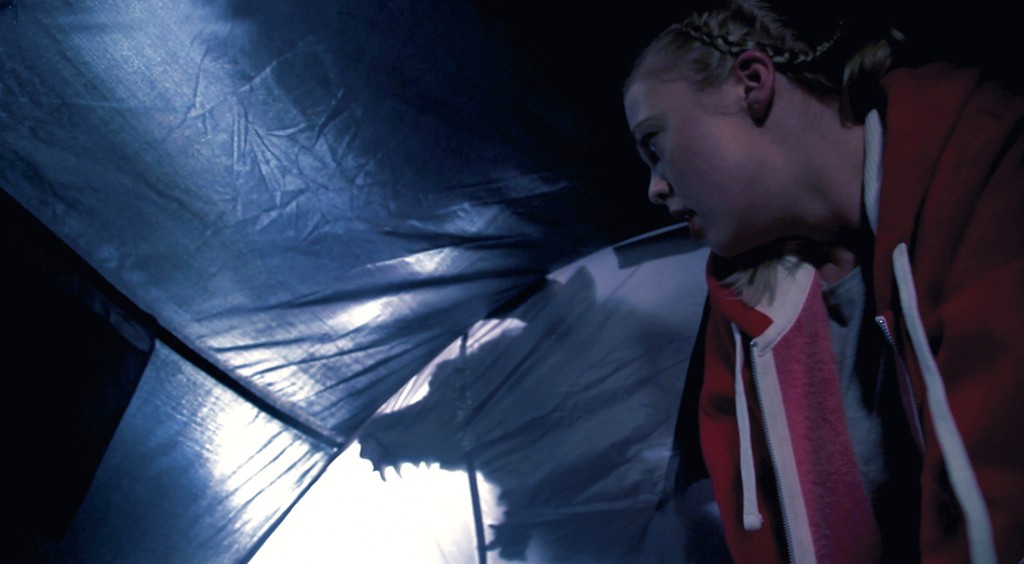 Laura had checked outside in the crescent moonlight and seen nothing but the two slaughtered sheep; the mountainside was empty and silent in the misty dark, except for the mysterious heavy footsteps she kept hearing over the wind. She could see nothing that made these sounds as she scanned the moors from the open flap of the tent, then a deep growl suddenly shattered the silence right behind her… Laura looked around petrified! How could she not see it..? 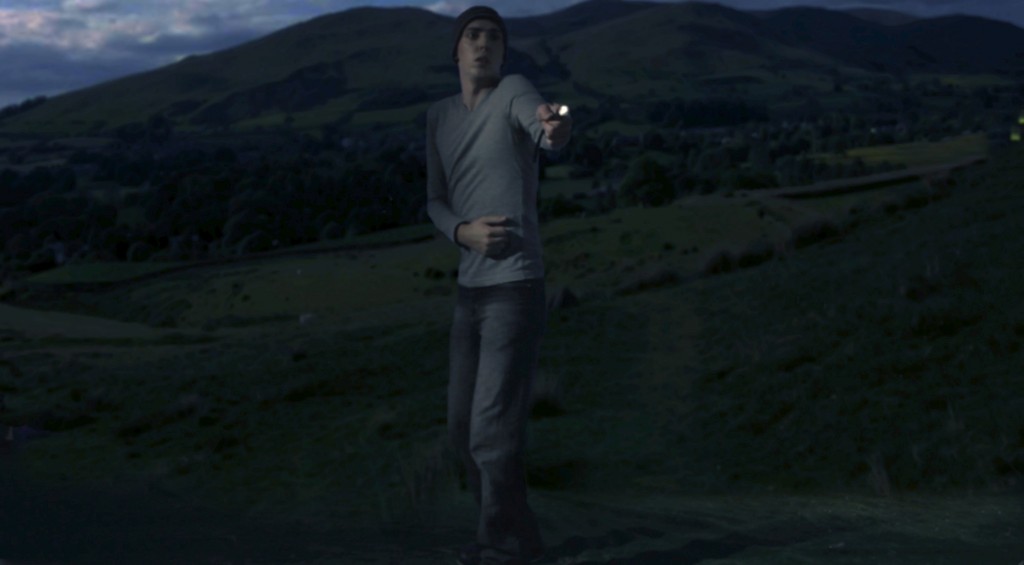 Go to the Facebook page for more of these “extended captions”, and while you’re there register your approval.

Then check out the latest teaser, made while filming is in progress:

Pounce is the first feature film produced by Other Dimension Films Ltd, a production company formed in 2011 by Keith R. Robinson for the purpose of producing low budget features, as well as commercial product. The film was written and is being produced/directed by Robinson and stars Kelly Wines, Lucy Clarvis and Sean Hayes, with Jordan Murphy and John Hoye. The cinematography on Pounce will be the responsibility of Toby Wilson and the film is currently being shot in S.E. London/Essex in England, followed by some location work in the “rugged mountains of Wales”.

Above: Director Keith R. Robinson at work lining up a shot

On the creation of the monster, Robinson had this to say:

Two separate artists are producing the Special make-up effects. Nicholas Thompson is creating all the splatter effects whilst Dave Fox (of Fox Zumba Dark Art FXs) is creating the animatronic creature, a creature we have deliberately been keeping shrouded in mystery and hidden from public view — with a strict NO PHOTOGRAPH policy imposed on the cast and crew of Pounce.

In fact, not even the cast have been shown the creature. As Robinson explains: “The decision to keep the creature hidden from the cast was to heighten their fear and anticipation as they filmed their scenes, preceding their encounters with it.” Method acting at its horror-film best! 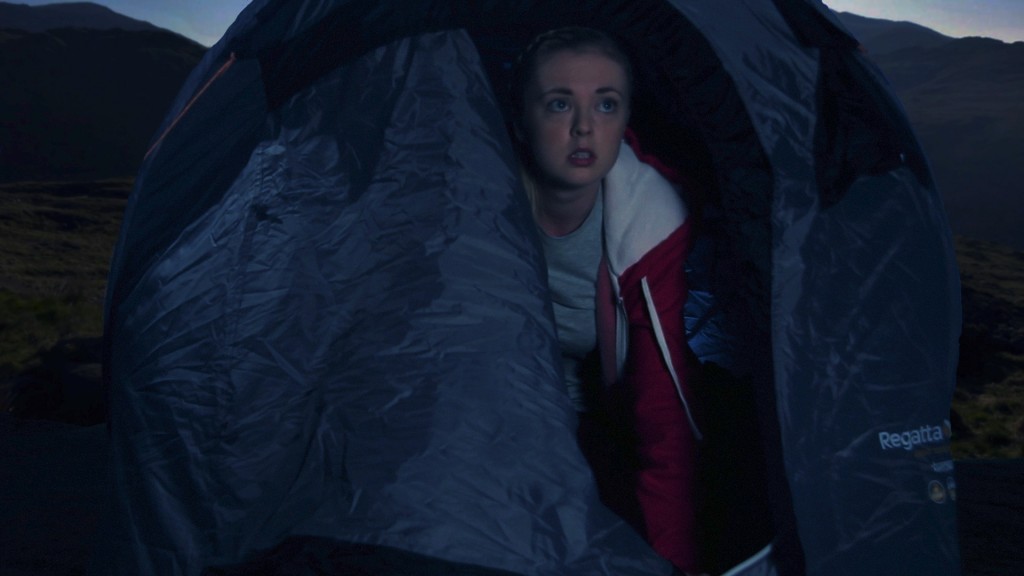 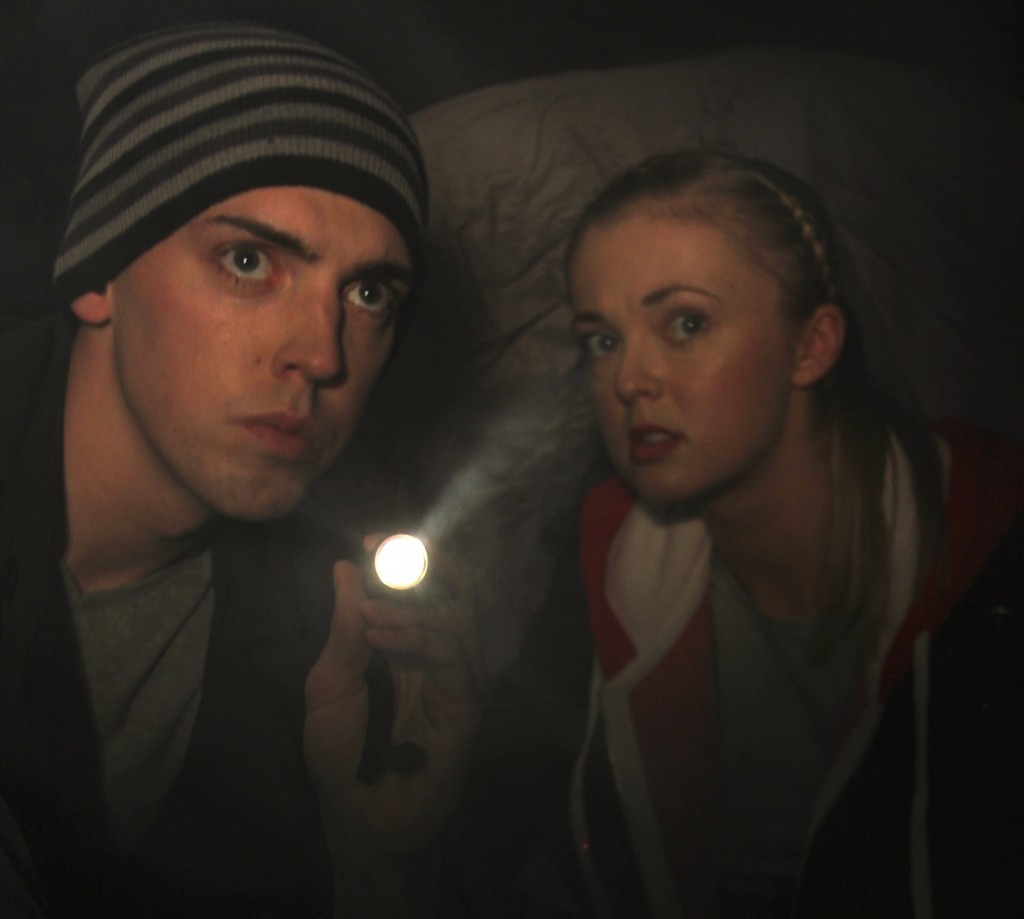 So we have not clear pictures of the beastie, but here is a conceptual drawing to whet your appetites: 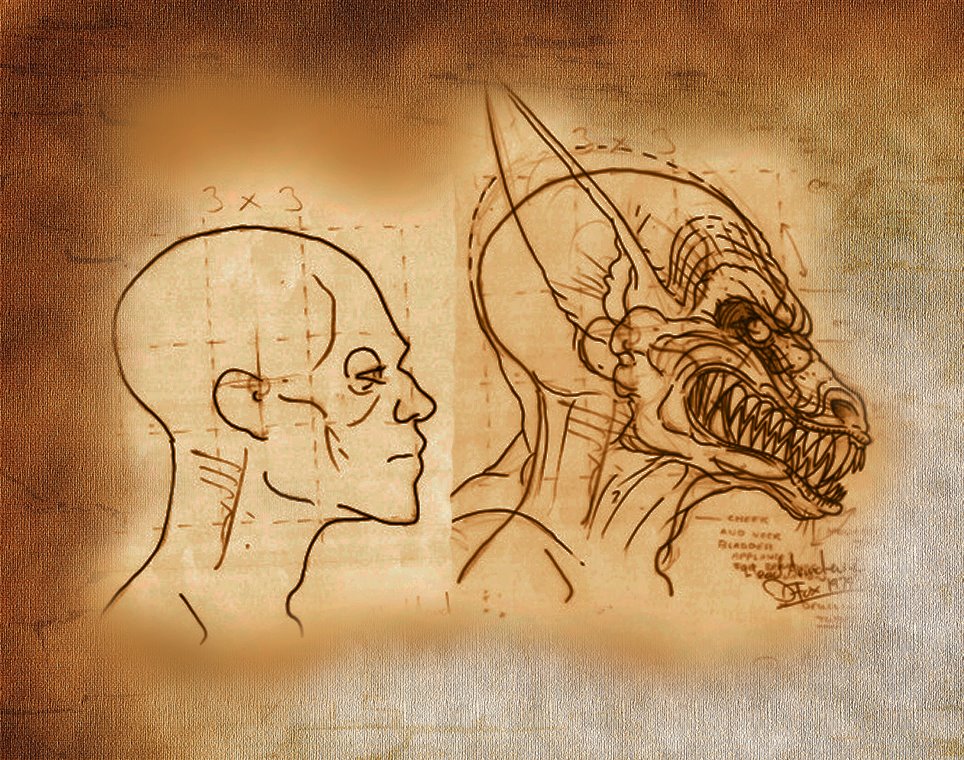 Looks like man-into-creature pseudo lycanthropy is going on here, though I suspect what we’re looking at is a facial guide for applying the make-up. Still, that’s a form of man-into-monster…

The Backbrain is definitely scratching to see more of this film.

Addendum: A few more images from the film…. 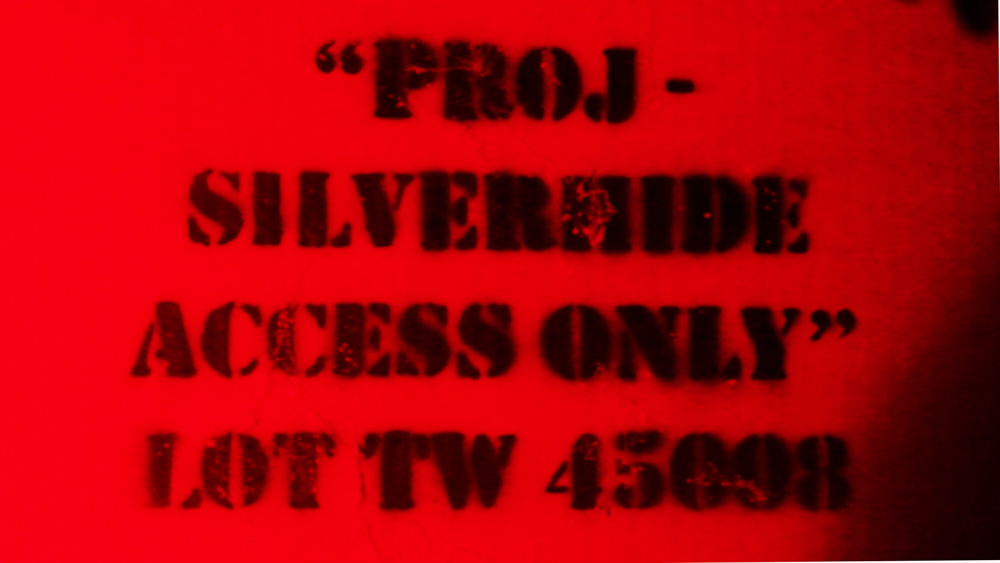 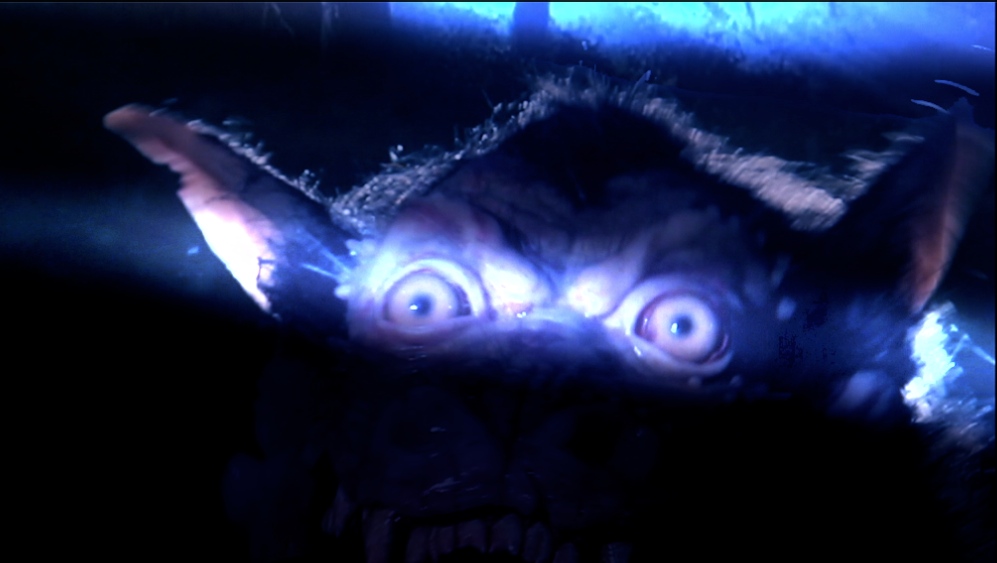 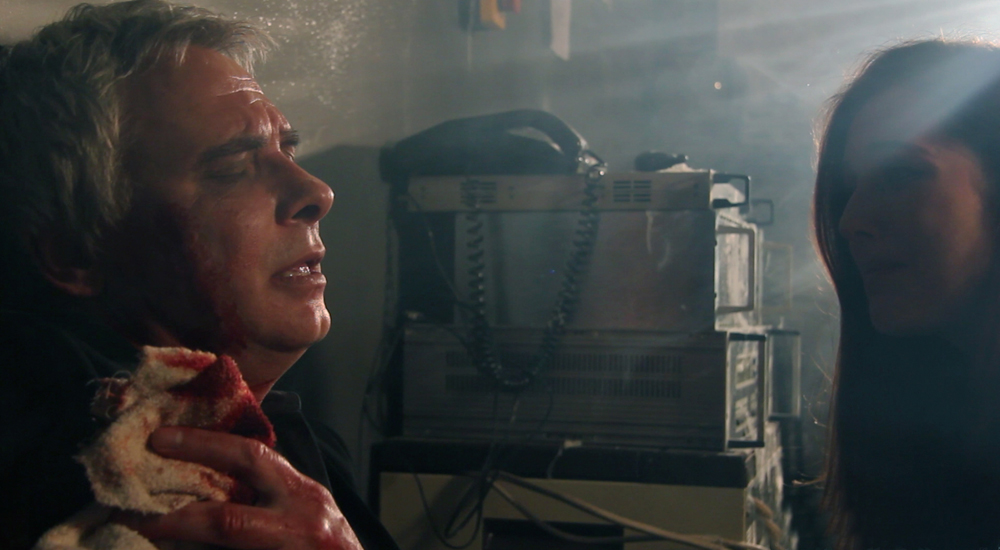 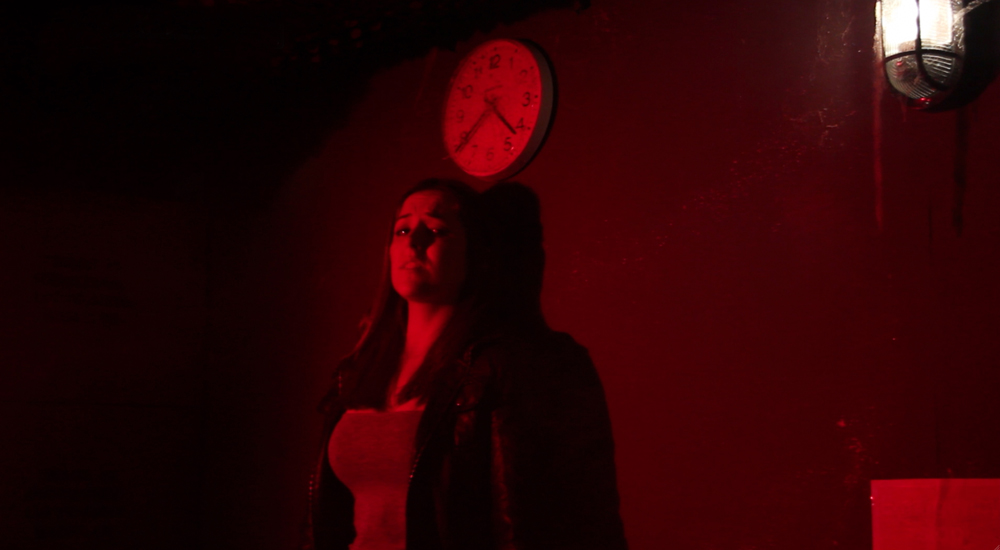