As the Backbrain has been honoured with the task of introducing the films scheduled to screen at the 6th Annual B-Movie Celebration’s Film Festival being held in Columbus, Indiana during September, it’s appropriate that the official press release appears here first. Read on to embrace the ideology and the passion that lies behind the notion that B-Movies deserve to be celebrated. 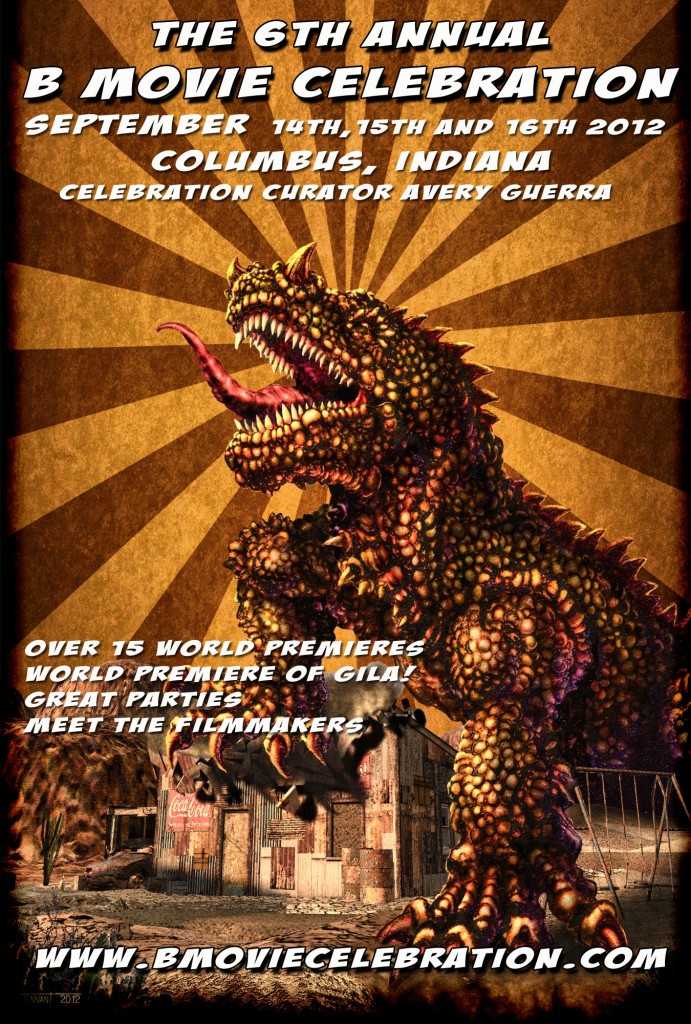 Often the term “B-Movie” is thought to carry an attitude of derision and scorn. Low budget “B” or Genre filmmaking is considered to be second class or in some way inferior to Hollywood’s slick corporate product. We at the B-Movie Celebration know otherwise. We know that for the most part the grand American cinematic tradition has evolved from origins in B-Movies. The weavers of images, whom we as a collective culture deem as masters of the cinematic arts — Scorsese, Coppola, Kaufman, Demme, Leone, Bogdanovich, Lucas, Spielberg and Tarantino — all either toiled in the fields of B-filmmaking or consider themselves primarily influenced by this cinematic tradition.

The B-Movie Celebration realizes that Hollywood has taken the stock-in-trade of B-Movies and subverted the exploitation aspect of it for its own ends, often ignoring the passion and the creativity of the B-Movie auteurs, and have created mega-budgeted flicks which have no heart and do not move the art of cinema further. The product Hollywood now produces often acts as a kind of celluloid Eurasian Milfoil, crowding all other forms of cinema off the viewing public’s radar and demanding that only they have the right or ability to bring entertainment to the world.

We take deep exception to this and intend to offer an alternative.

The B-Movie Celebration recognizes that most of the innovation and indeed the very definition of the cinematic arts came as a result of B-Movies. There is a tradition and legacy here that should not be forgotten. Filmmakers like Oscar Micheaux, Ida Lupino, Samuel Fuller, Jacques Tourneur, Lloyd Kaufman, Robert Lippert, Roger Corman and Jim Wynorski have all contributed significantly to the tradition and the emerging art form that is Movies. Some of them still do.

This year we are showcasing a global overview of emerging genre filmmakers. These filmmakers are from around the globe and are responsible for creating what we at the B-Movie Celebration know will influence and impact the next generation of Movie fans. These people have taken on the banner of advancing the art of the motion picture and they like their predecessors must be celebrated. Come and share their works with us this September when the B-Movie Nation comes together to celebrate Everything B.

We hope you’ll join us on September 14th-16th for the Sixth Annual B-Movie Celebration — this year at the YES CINEMA in Columbus Indiana.

Well, there you have it. Film Festival Organiser Avery Guerra adds:

The B-Movie Celebration film program will feature the world premieres of “Gila!”, “Spores”, “Synevir”, “From Beneath”, “The Woodsman”, “Lizardman: The Terror From the Swamp”, and the North American premieres of “Virgin Beach Creature”, “Zombies From Outer Space”, “Poisoned”, “Monkey Boy”, “Tartarus”, “Attack of the Indian Werewolf”, “Bait”, plus the US premiere of “Metamorphosis” and the US and festival premiere of “The Tentacle’s Claw”, festival premieres of “Jonah Lives”, “Squid”, “House Of Ghosts” and “Red Blob Massacre”, and screenings of hotly anticipated films such as “I Am A Ghost”, “Return of the Killer Shrews”, “Bio-Slime”, “Frankenstein: Day Of The Beast”, “Empress Vampire”, “The Caretaker”, and much, much more … including a rare screening of the new Daikaiju short “The God Of Clay”. It’s an amazing line-up already — and there’s more on the way!

Download a PDF copy of the Press Release here.

2 Responses to Introducing the B-Movie Celebration