How Diplomatic Can the Zombie Apocalypse Get?

Answer: Very. And it’s some of the messiest diplomacy you’ll ever come across.

Due for release at the 2013 San Diego Comic-Con International is a book like no other — the much-anticipated Zombies vs Robots: Diplomacy, fourth volume in IDW and editor Jeff Conner’s epic ZVR fiction project. 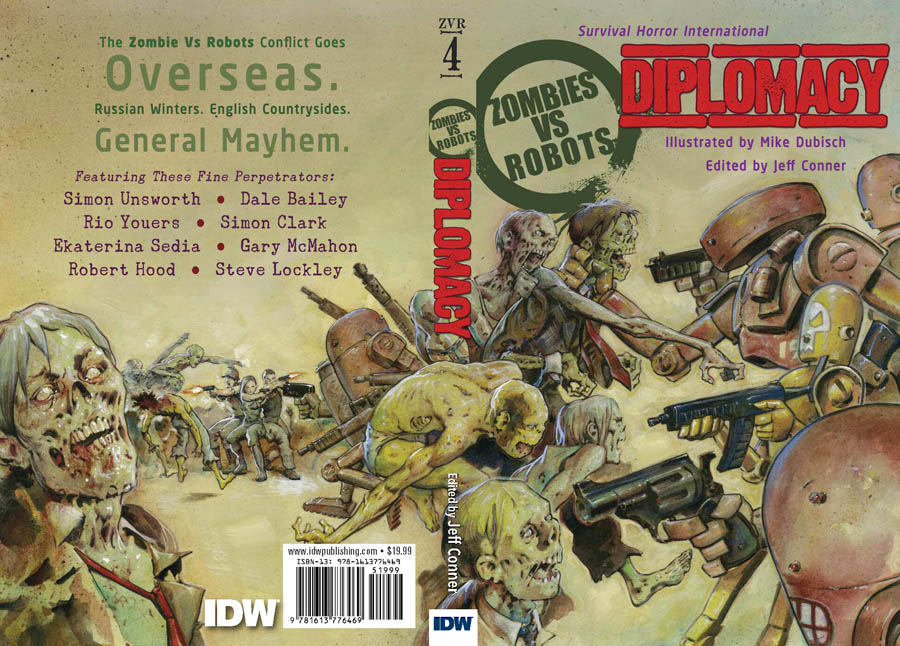 With original stories based in the world of Chris Ryall and Ashley Wood’s unique comic franchise, this project is awesome in scope, having corralled a vast array of top genre writers from across the planet (including yours truly) — giving them (almost) free rein to play not-so-nice in a world where clunky robots have been developed to deal with the now iconic undead plague we all know and love.

But if you think the just-released World War Z movie is the be-all and end-all of the subgenre, and that when it comes to the zombie apocalypse you’ve seen it all, think again! Zombies vs Robots: Diplomacy offers eight amazing tales set in Russia and the UK — plunging the Lion and the Bear into an international diplomatic disaster like no other. How cold can the Cold War get?

And in the end which is worse: the zombies or the robots?

On Friday, July 19, artist Mike Dubisch and editor Jeff Conner will be signing freshly minted copies of ZVR: Diplomacy at Comic-Con International, specifically at the IDW booth (#2643) from 2pm to 3pm. It’s a magnificent book, too. As well as some truly imaginative work from a fantastic bunch of writers (check out the list on the cover above), it is illustrated by renowned artist Mike Dubisch, whose Lovecraftian graphic novel WEIRDLING was published in 2007 to much acclaim.

In short, if you can be there, go for it! If not, the book should be for sale generally in about two weeks.