The Insects Will Rule

We all know that despite humanity’s profligate populating of the planet, we are still vastly outnumbered by the insects. It is said there are more insects in a few random acres of practically anywhere than there are people worldwide. Fortunately, each individual bug is rather small. But what if they weren’t?

There’s a grand tradition of giant bug movies that seek to remind us of our true status in the scheme of things — the heyday of the genre being the 1950s, when such classics as Them! (US-1954; dir. Gordon Douglas), The Black Scorpion (US-1957; dir. Edward Ludwig), The Deadly Mantis (US-1957; dir. Nathan Duran) and Monster from Green Hell (US-1957; dir. Kenneth Crane) sought to metaphorically put us in our place. Add the giant arachnids, and let’s face it! We’re doomed.

The tradition lagged for a time, but the Big Bugs do crop up again every now and then, in films such as Ticks (US-1993; dir. Tony Randell), Mosquito (US-1995; dir. Gary Jones), Bugged (US-1997; dir. Roland K. Armstrong), Centipede! (US-2004; dir. Gregory Gieras) and the more recent Infestation (US-2009; dir. Kyle Rankin). Even the King of Monsters, Godzilla, has had his fair share of trouble with mega-giant insects, such as the prehistoric throwback Megaguirus from Gojira tai Megagirasu: Jii Shômetsu Sakusen [trans. Godzilla vs. Megaguiras: G-Eradication Command] (2000; dir. Masaaki Tezuka).

Well, it seems that another insectoid gargantua is on the way. Twitch reports that director Benni Diez is well advanced in the production of Stung, a slice of reel-life drama about giant wasps. 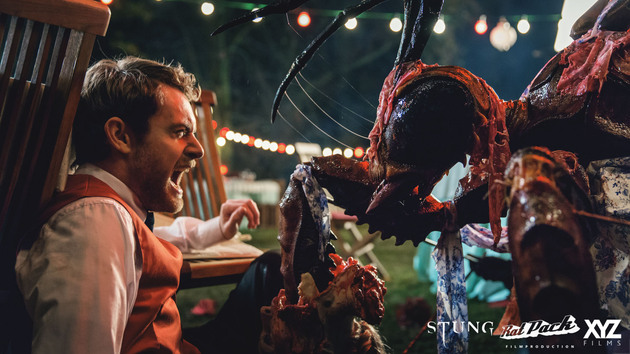 The film stars Matt O’Leary, Jessica Cook, the inevitable and always welcome Lance Henriksen and Clifton Collins — and a host of rather nasty stingers. From the conceptual trailer below, they’re smart little buggers, too.

I’ll definitely be keeping a large can of Bug-Off ready for that one.