Love spiders? Well, there’s a new one of the giant variety due in town. And Spider-Man will be quivering in his boots… 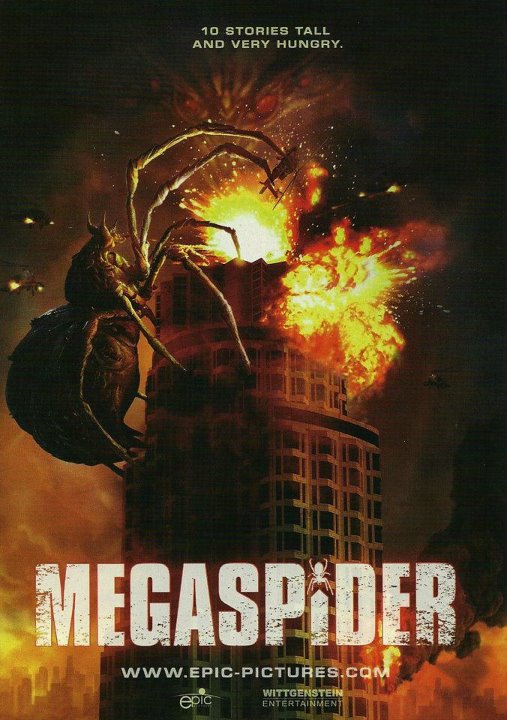 Returning to our shared office at work the other day, a colleague reached to open the door, shrieked and started back in horror. Why? There was a spider hanging by a single thread from the door-knob. The spider was about the size of a large dust mote but nevertheless the reaction was marked. Being a hero of epic proportions I gently palmed the arachnid menace and released it out the nearest window, apologising to the beastie for the inconvenience as it scurried up the wall.

That’s the thing with spiders: something about their alien appearance is enough to cause cries of terror and dismay, no matter how small and innocuous the spider might be. Obviously the bigger they are, the worse the reaction. I, too, though undaunted by the dust mote, baulked at the hand-sized huntsman that appeared on the wall of my study a week or so ago, opting to leave him in peace (he eventually left of his own accord). Sure, they get much bigger than that  — you know, in jungles and on banana plantations, where they trap and eat birds — and are very scary indeed, but should they grow to be the size of a house they would be objects of extreme horror. Ask Stephen King, who made a giant spider the climactic el supremo monster in his excellent novel It (following in the footsteps of Tolkien, perhaps, who made Frodo face the giant spider, Shelob, on his way into Mordor). 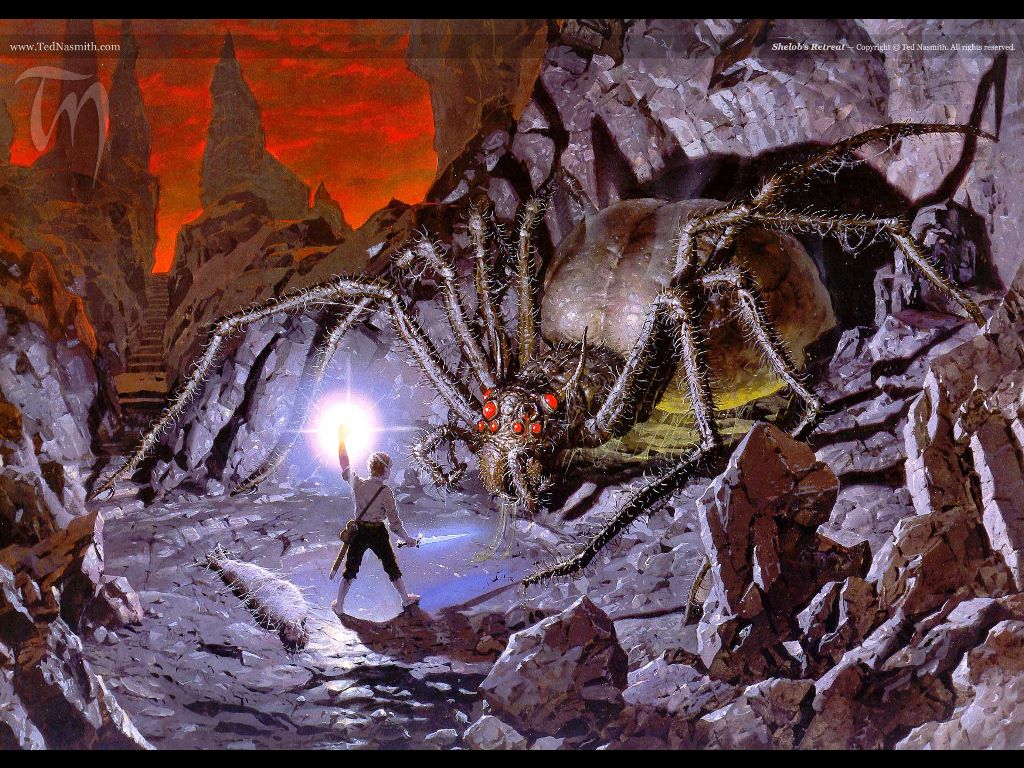 Cinema has exploited humanity’s essential arachnophobia for many decades, especially when it comes to spiders of the giant kind. Hanging from massive webs in prehistoric jungles or blocking the warrior’s path in dank tunnels beneath castles, giant spiders have made cameo appearances in various filmic variations on The Lost World and in fantasy epics like Ator, the Fighting Eagle [aka Ator l’invincibile] (Italy-1982; dir. Joe D’Amato). But mega arachnids really hit the big time with Jack Arnold’s 1955 film, Tarantula, a classic 1950s giant bugfest, the effectiveness of which remains undiminished today despite the dodgy super-imposed SFX. Arnold tried again with a normal-sized spider becoming monstrous relative to the diminishing protagonist of The Incredible Shrinking Man (1957). Other entries in the subgenre followed, including Earth vs the Spider (US-1958; dir. Bert I. Gordon),  Son of Godzilla (1967) with a Godzilla-sized Spiga, The Giant Spider Invasion (US-1975; dir. Bill Rebane), right through to the big-budget Eight Legged Freaks (US-2002; dir. Ellory Elkayem), which featured not just one species of ultra-giant spider but many of them, all startlingly CGI-rendered. Even though it doesn’t include giant spiders as such, we really should mention Frank Marshall’s Arachnophobia from 1990, which, like the earlier Kingdom of the Spiders (US-1977; dir.  John ‘Bud’ Cardos), has so many spiders in it they surely add up to a couple of Big Ones. Meanwhile, Jeff Leroy’s Creepies series managed to squeeze in an assortment of daikaiju tropes, including giant robots:

Now, to prove that the appeal hasn’t disappeared, we have a new giant spider epic coming soon from director Mike Mendez — Mega Spider. 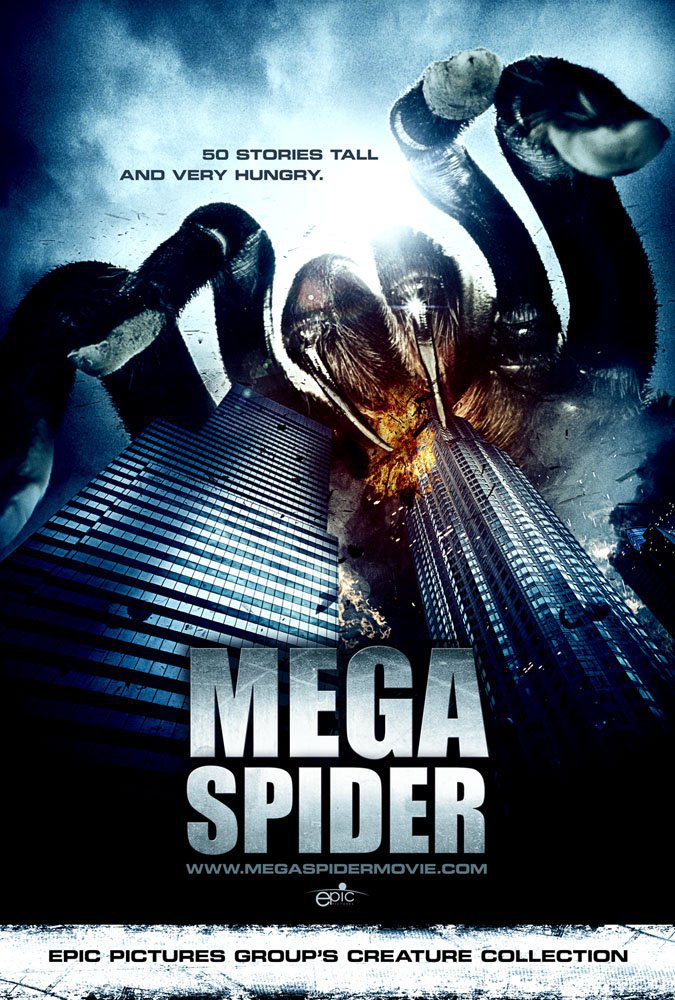 A 50-foot tall alien spider escapes from a military lab and rampages the city of Los Angeles. When a massive military strike fails, it is up to a team of scientists, soldiers, and one clever exterminator to kill the creature before the city is destroyed. 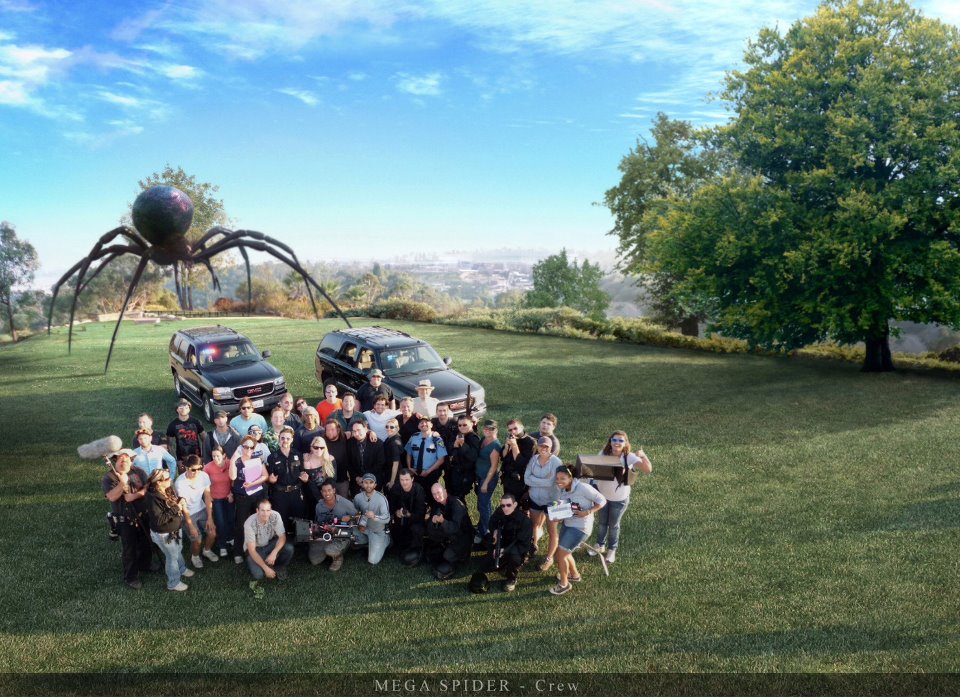 Director Mendez (previously known for some decent directorial work on the indie horror film The Gravedancers) describes Mega Spider as a “Tremors-style creature feature” (implying, one hopes, that it is good-humoured and intelligently crafted action-thriller, with appealing characters, a terrific script and lots of suspense).

“The script was hilarious, and as we got into the creature design and the casting, we had one objective in mind: fun! I love the tone of this movie and think audiences are going to have a wild time.”

Above: Patrick Bauchau and Ray Wise

Lead actor Greg Grunberg commented after filming was done: “They say never work with animals and babies; I want to add giant spiders to that list. Having such a blast, laughing every day, and yet the movie is scary as shit!” 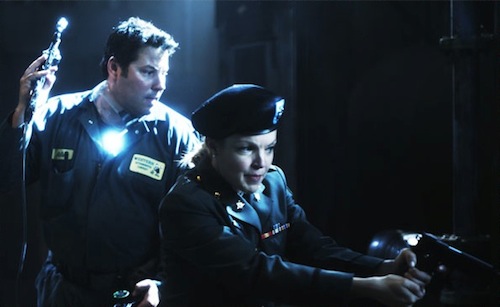 Above: Greg Grunberg as Alexis Mathis and Clare Kramer as Lt. Karly Brant

By way of confirmation, co-producer Travis Stevens (pictured below in the thick of production) sums it up this way:

“This is a movie about killing a big-ass bug. There’s a lunacy to the concept that we’re really having fun with. You look at classics like Tremors or Starship Troopers, and the humor is just as important as the mayhem. I think we’re finding a great balance between the two.” (Source) 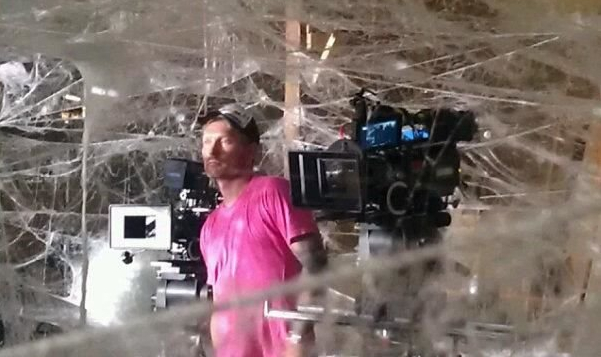 And just to prove that the spider gets down and dirty in the big city, we have this money shot to keep you interested: 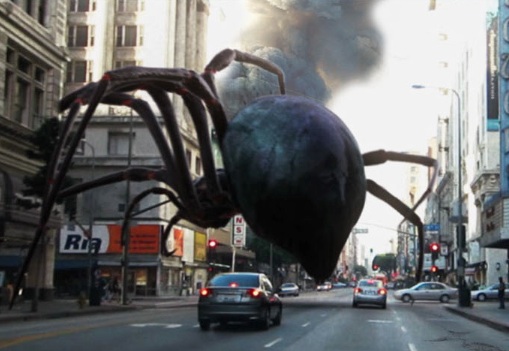 Mega Spider is currently in post-production, but I just know all you arachnophobes out there will be dying to see it!

I have no idea what it has to do with the movie, but here’s a video of director Mendez and Make-up artist Emma Jacobs singing “It’s No Good” by Depeche Mode while moving in to the location shoot!

1 Response to New: Caught in the Mega Spider’s Web