Artist Todd Tennant, who is still plugging away at his much anticipated (and now official) graphic novel version of the Ted Elliott/Terry Rossio 1994 Godzilla screenplay (the one that wasn’t filmed in a ludicrous quibbling over budgetary issues and ended up being “replaced” by the non-Godzilla Godzilla film of Roland Emmerich in 1998),  has been working with Australian 3D artist Elden Ardiente to produce the spectacular version of his Godzilla ’94 design that appears below (click on it to enlarge):

[Unfortunately we have been asked to remove the image for the time being. By way of recompense Todd has supplied two “teaser” images for the upcoming graphic novel. Click to enlarge.] 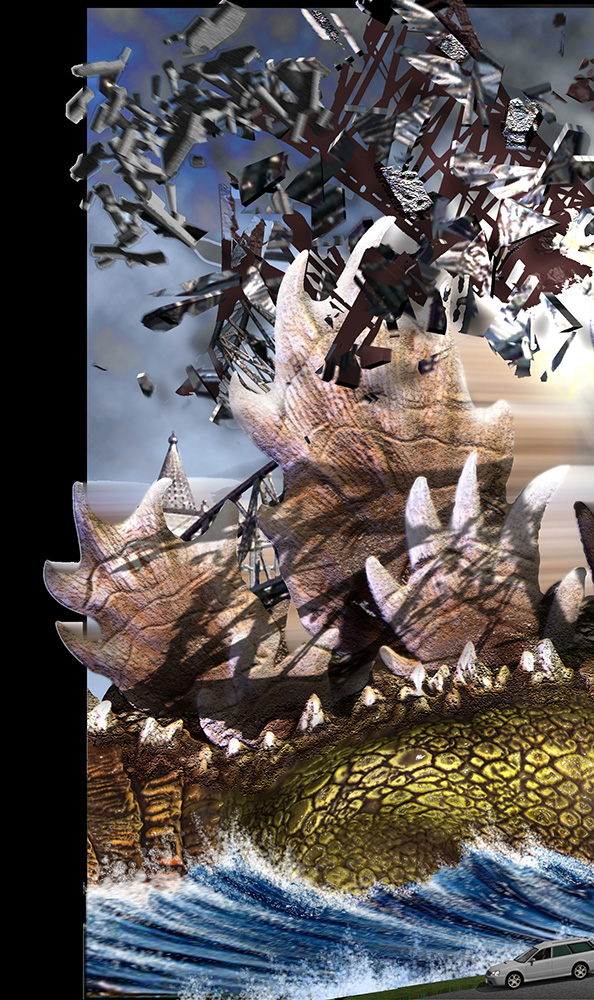 When I showed Elden’s great 3D art to Terry Rossio, he agreed to commission him to make 3D models of both G’94 and the Gryphon. I will be eventually using them myself for the Godzilla ’95 graphic novel. This will definitely help me finish the G’94 GN quicker).

Looking good! The prospect of this graphic novel remains a future high point on any Godzilla fan’s calendar and would make a terrific companion release to follow-up from the upcoming Godzilla blockbuster being directed by Gareth Edwards. Keep at it, Todd!

To learn more about Todd’s Godzilla ’94 graphic novel (and his other kaiju project), check out this Undead Backbrain article and to read the 78 pages of the graphic novel that already exist go to Todd’s American Kaiju site.

Source: Todd Tennant. Note that the images above are copyright and should not be used without permission.

1 Response to Awesome Rendition of Godzilla ’94