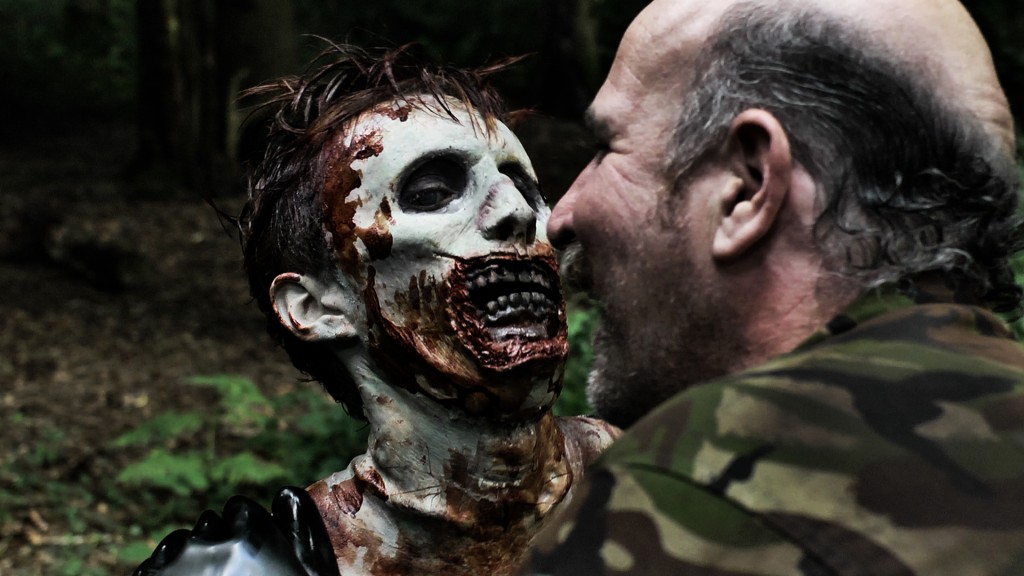 With its British accents and hints of thematic delving into some of the religious implications of zombieism, British splatterfest Zombie Resurrection (written and directed by Andy Phelps and Jake Hawkins) seems to be offering the kind of original take on old tropes that fans of the zombie sub-genre are keen to get their hands on (well, I am anyway!): staying within the tradition and retaining the best of it, while exploring some fascinating tributaries branching off from the clichés — and doing it intelligently. The filmmakers describe the film as “ambitious, gory and sometimes very funny” and as “one of those rarest of beasts – a completely new slant on the zombie story”.

From the look of the trailer, they might be telling the truth!

Fifteen months after the zombie apocalypse, a small band of survivors are forced to take refuge in an abandoned school, where they discover a mysterious zombie with the power to raise the undead back to life.

Undead Backbrain’s low-budget cinema sleuth, Avery Guerra, asked some probing questions in order to ferret out the truth about this film, which is now in post-production and looking for funding to help get it done. 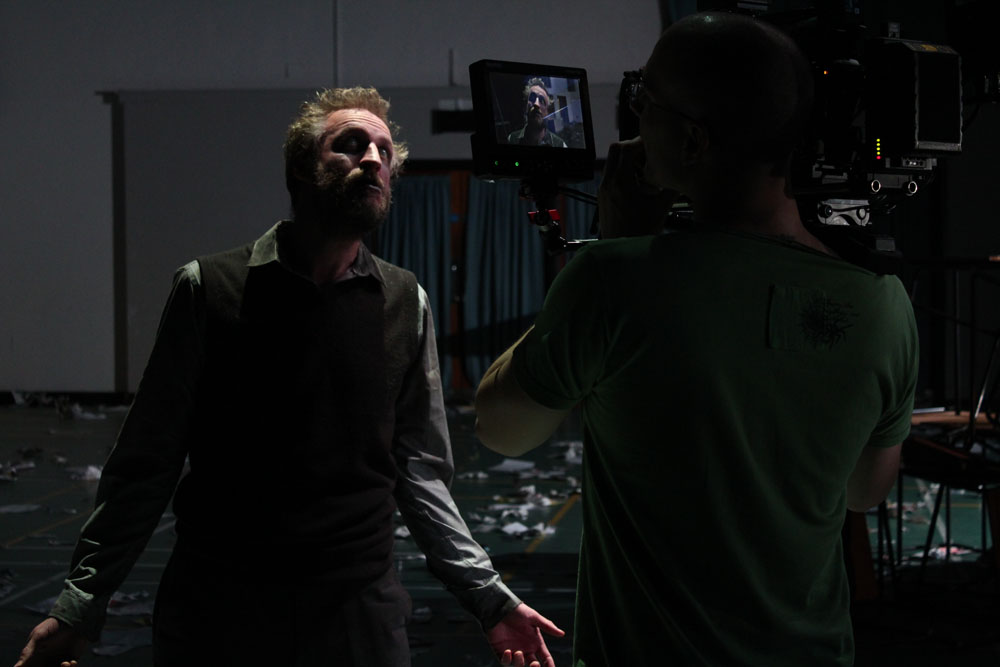 Above: The Messianic zombie (Rupert Phelps) gets ready to deliver his “Sermon on the Mount”

How did Zombie Resurrection come about?

Andy Phelps: Originally, it was a conversation that I had with my son one dinnertime – what would happen if Jesus came back as a zombie? What would he be able to do? A couple of weeks later Jake and I hooked up for a drink, and by the end of the night we’d riffed the concept around to the point where we were too excited by the idea to not write the screenplay.

Jake Hawkins: At first we were planning on putting the screenplay up for sale on InkTip, but the further we got into the writing the more it looked like we could actually do this ourselves. Both of us have a background in short films, and tackling a feature project is a completely different animal, but at the beginning of 2011 we threw caution to the wind, unshackled ourselves from our respective day-jobs, and we’ve been working full-time on the movie ever since. 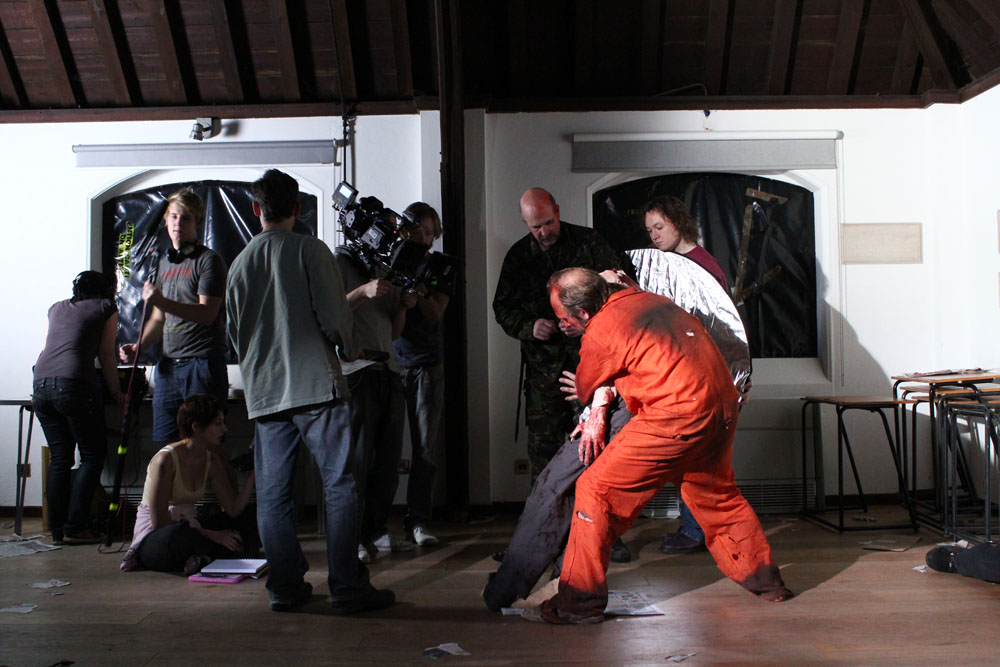 Where was Zombie Resurrection filmed and at what stage is the production right now?

AP: We shot the movie over 24 days (and nights) in August 2011, in three locations in Hampshire (in the South of England). We knew we had to work fast to get it all in the can on such a quick shoot. Not helping was the fact that we had a large ensemble cast (nine principal actors) and about seventy zombies to worry about, as well as all the in-camera blood gags and action sequences.

In the end, we used a fairly small crew of 23 people, but it got hairy on our big horde nights, having to process so many people through our costume and make-up teams.

JH: The film is currently going through post-production – final edits, sound, foley, grading and all our digital FX. We have an IndieGoGo funding campaign running at the moment to try and raise the money to get us through to distribution, so if you ever fancied watching two men squirm on the wrong side of the camera, the link is here. 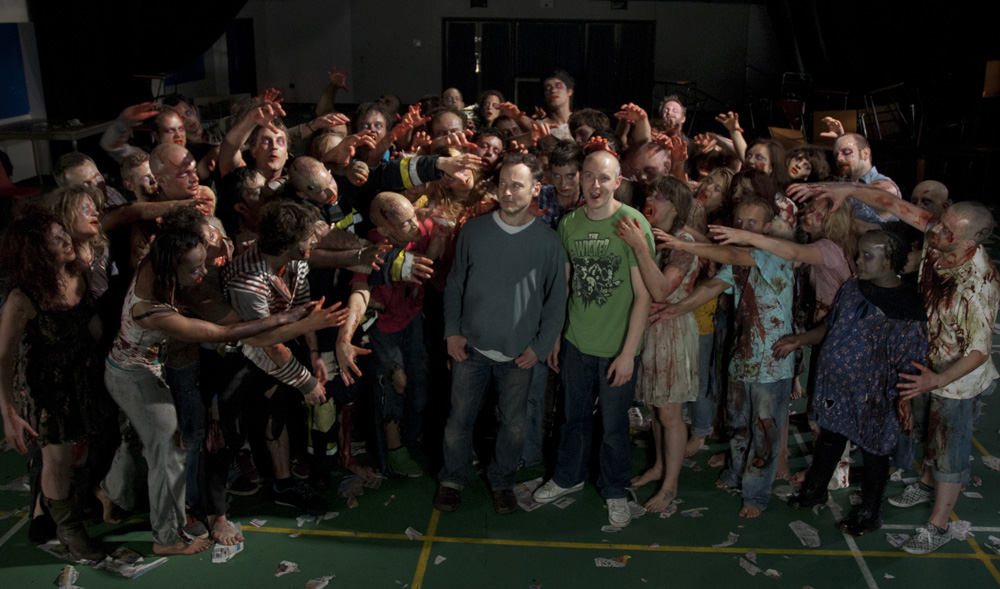 Andy and Jake in an uncomfortably close encounter with their horde

AP: Faith, and specifically the boundaries between science and faith. When is it reasonable for a logical man to take a leap of faith when presented with something that science can’t explain? This is the benefit of having such a large ensemble cast, in that you can give each character a different angle on the same theme. Collectively they have the big picture, but you get to seed in a lot of conflict and drama looking at where their beliefs and values clash.

JH: We felt it was massively important when we were writing Zombie Resurrection not just to turn out a generic movie where a bunch of attractive survivors get picked off one by one, and to try and get some social commentary in there. That’s the difference between the original Dawn of the Dead and Zack Snyder’s remake; the first is a really intelligent study of consumerism, while the remake is a just a pretty good zombie movie. 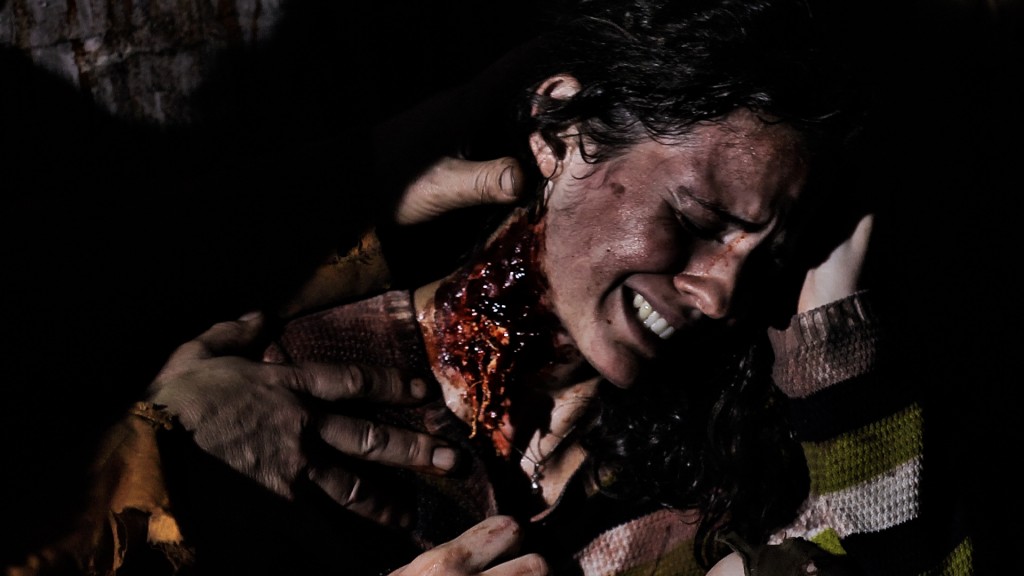 AP: Well, I grew up through the UK’s “video nasty” era, so that’s where my filmic roots lie. Very generously, the government put together a list of all the horror video titles that were most likely to cause a breakdown in public order, so to every fourteen-year-old boy in the country this became a must-see movie template. I am very much in this early-80’s exploitation cinema mind-set, before too much CGI came along and made everybody’s life safer.

JH: But specifically, movies like Romero’s early zombie outings, as well as Evil Dead, Braindead, Re-animator. Films where the humans are often much more dangerous to each other’s wellbeing than the monsters are. Movies with a sense of humour, even when the cast play it completely straight. 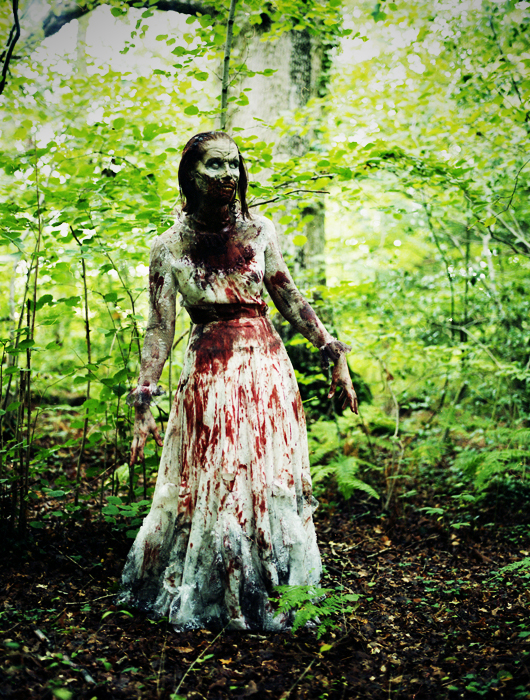 AP: Through post-production, and then out to the Cannes film market in May. The film was never intended for a theatrical release, but that’s not going to stop us blitzing as many horror film festivals across the planet as we can before the DVD and Blu-ray come out. It’s the thought of being sat at the back of a screening watching a horror-literate audience reacting to your movie that keeps us going through the long days and the vast amount of work it takes to pull a feature together.

So there you go. They sound rather convincing to me and are certainly able to talk intelligently about their inspirations and their intentions in creating this particular film. This augurs well for Zombie Resurrection and it will bring new life to the genre. Maybe the title will be prophetic! 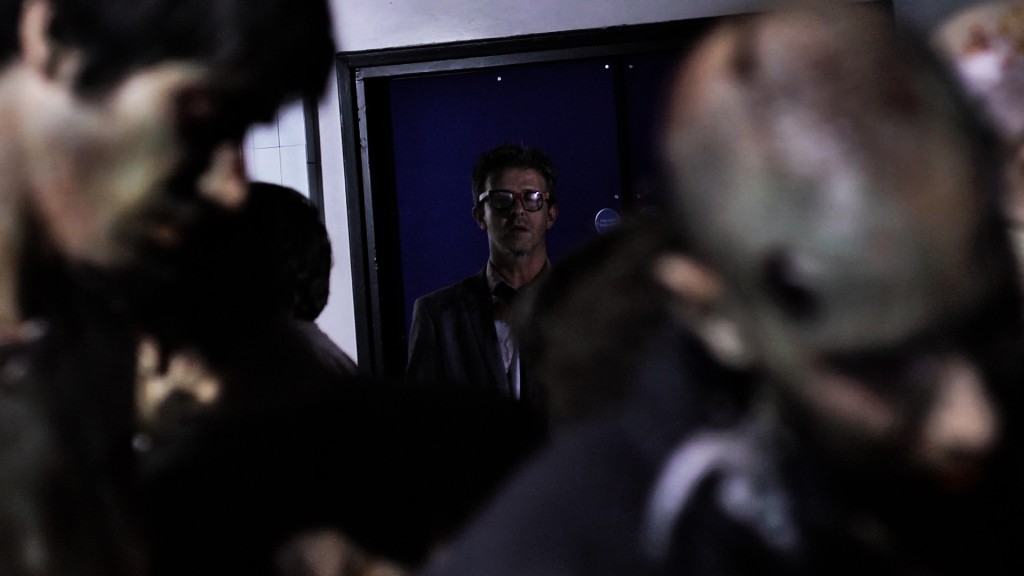 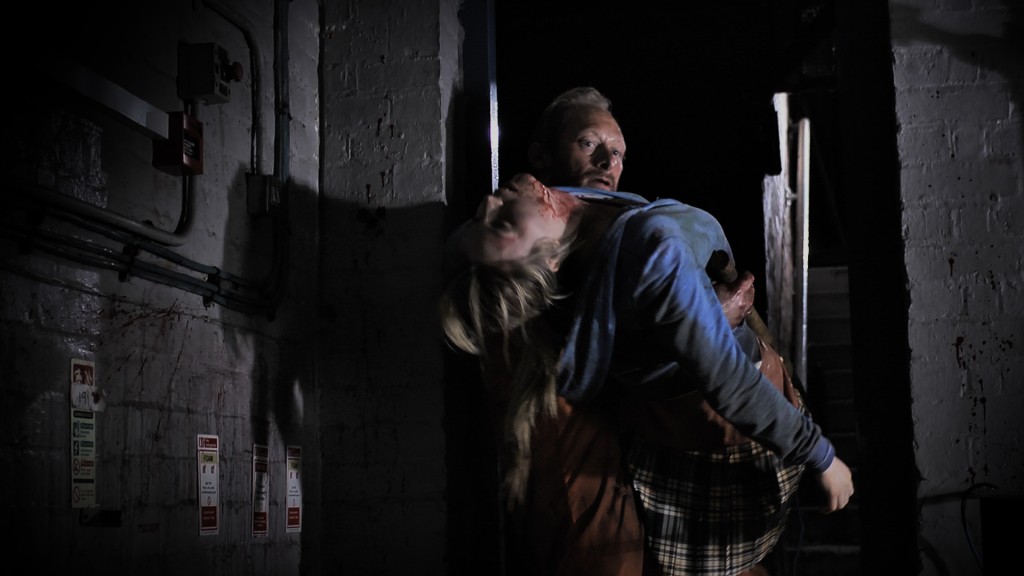 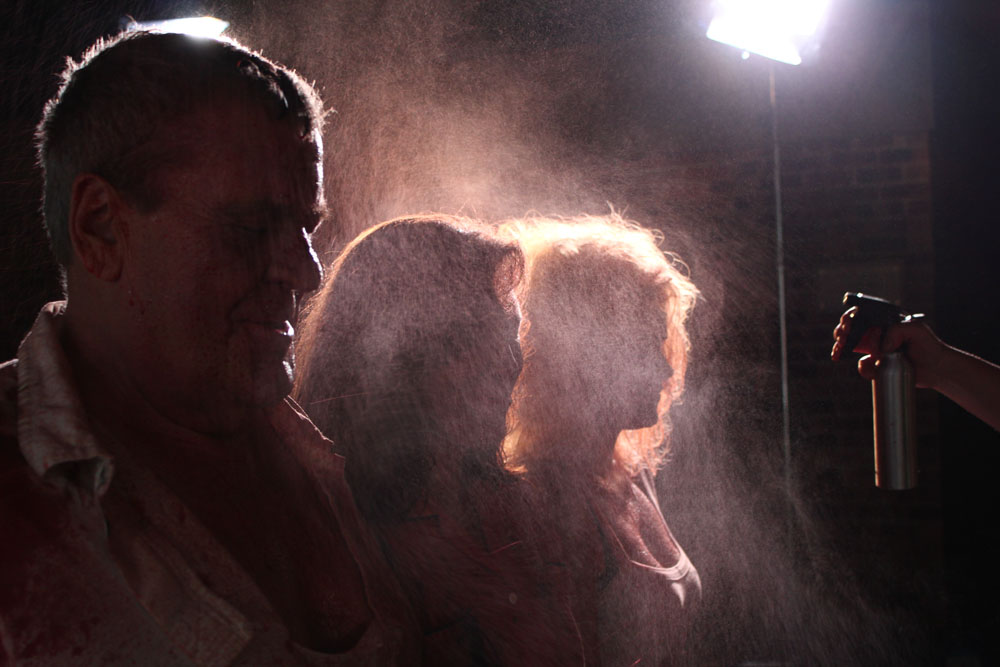 Above: Some zombies get a final liberal coating in blood before shooting

Below is a video of the pair, spruiking the film’s IndieGoGo appeal and it includes some fascinating behind the scenes snippets — all of which makes me want to see this film get completed sooner rather than later.