A Giant Gila Monster for Christmas

The producers of Jim Wynorski’s giant monster remake Gila! are currently whipping up a grassroots campaign to get the film — much lauded among B-Movie Celebration attendees who saw its premiere during September — aired on the SyFy Channel for Christmas. 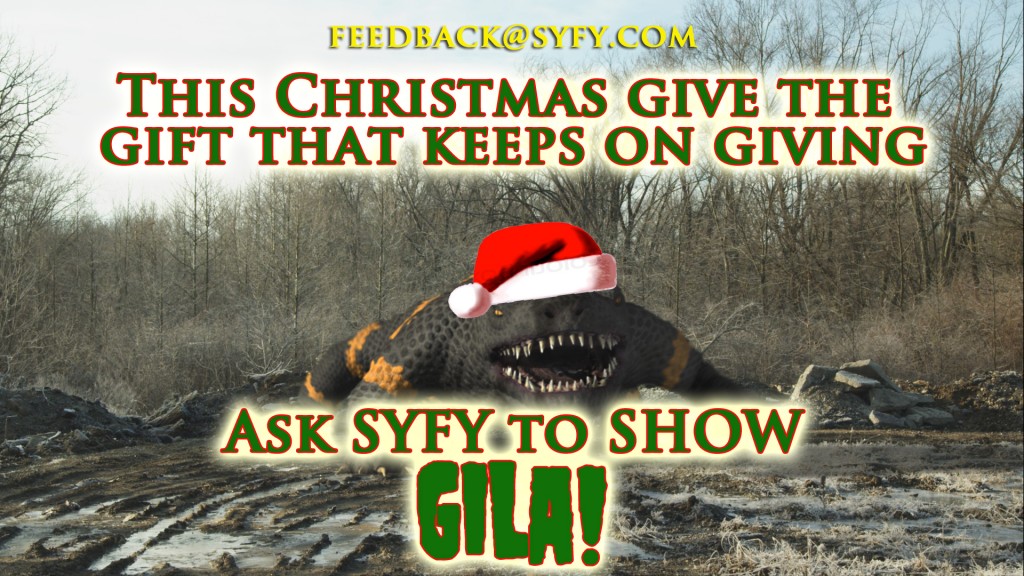 Check out the trailer and I’m sure you’ll agree this would be a perfect Christmas monster treat.

An exciting prospect, eh? Well, the Backbrain’s newshound and Gila’s publicist Avery Guerra suggests the best approach to getting this Christmas pressie delivered to TV screens across the US during Christmas would be:

“Send a quick e-mail to: feedback@syfy.com, asking the SyFy Powers That Be to play our great film Gila! — Jim Wynorski’s remake of The Giant Gila Monster — this holiday season on their Channel. It’s the perfect giant monster movie for the holiday season!”

Sadly, it won’t help me to see it, of course, as SyFy doesn’t screen in Australia.

Meanwhile I thought this might be the perfect opportunity to catch up with the film’s star, Gila himself. [The Backbrain’s previous interview with Gila can be read here]:

An Interview with Gila by Robert Hood:

RH: Welcome once again to the Backbrain, Gila. How’s it feel now that the film’s in the can and has even premiered.

Gila: Feels great! I got a bigger hole in the ground than I useta have — and a holiday hideaway at Malibu that I bought the other day in anticipation of the profits…

RH: Well, that’s wonderful. But I guess what everyone wants to know right now is —

Gila: Did I mention my Malibu condohole is right next door to Godzilla’s radioactive slag-heap?

Gila: Big celebrity! The guy’s a loser! King of the Monsters, my ass. He’s gettin’ all high-‘n’-mighty and we’re still waitin’ on his new movie to make any sort of noise at all.

Gila: Pah! My giant monster buddies willa gone on our scheduled ‘pocalyptic rampage by then and there won’t be no cinemas left standing.

RH: Rampage? Really? Which buddies are these?

Gila: Oh, you know — Hostie from Korea’s takin’ another shot at it, Fin Fang Foom from China’s makin’ a comeback (or so he reckons), an Old One you mighta heard about — Cthulhu, the Eater of Men’s Faces or somethin’ — he’s heard the Call again — and … Hey, you’re not gonna publish any of this, are ya? This is all off the record.

RH: No, no. Confidentiality’s my middle name.

Gila: Better be. Don’t want the authorities to hear about it. They take a dim view of ‘pocalyptic rampages.

RH: Getting back to the point of this interview, the producers are trying to get your new film onto the SyFy Channel for Christmas. You excited about that?

Gila: I wanna do my bit ta destroy human civilisation and everyone’s in a relaxed sorta mood in the aftermath of the pressies and roast lunches and lollies and shit. Get ’em while they’re weak an’ susceptible, I always say.

RH: The film’s going to destroy human civilisation, is it? I thought it was a good movie.

Gila: It is! Bloody damn good. [He leans close. I gag from a wave of lizard breath] But there’s these secret messages hidden deep in the subtext. Has ta do with hypnotism and subliminal commands — crap like that. Cthulhu’s an expert at infestin’ scripts with coding that’ll prepare you puny humans for the Time of Destruction. All parta the Plan.

Gila: That’s the one. [He frowns. It looks real weird on a lizard.] Hey, ya can’t publish anythin’ about the Plan.

RH: No worries. Listen, ah, I have to go now. There’s a couple of guys from the military I have to talk to.

Gila: Geez, that was a quick interview.

RH: Yeah, sorry. Anyway, good luck with the campaign to get Gila! on SyFy. I’m sure my readers’ll be right behind it.

Gila: I hope so. Mebbe we can do another interview next year — no, no. That’s no good. The whole world’ll be a smoking ruin by then. You happy with interviewin’ me in the wreckage of ya house?

[I run to the car, jump in and take off down the road. I half expect him to chase me, but when I look back he’s busy eating a huge vat of burritos…]